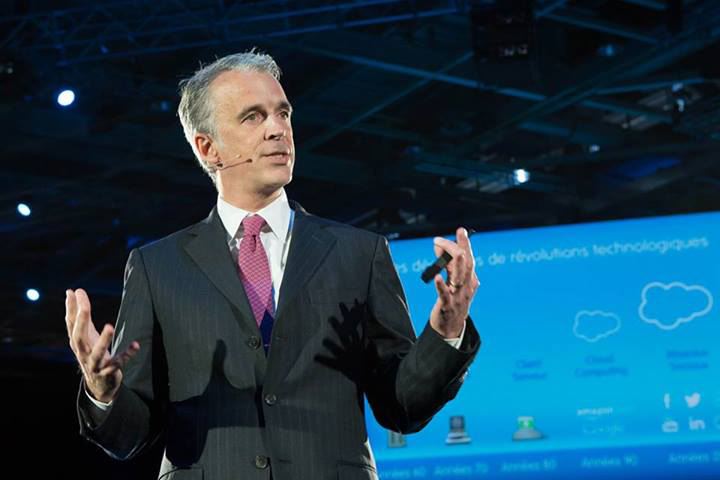 "Our international client base benefits from my genuine appreciation for other cultures and customs." — Parker Harris FR'85 [October 2013 SYA Fund appeal]

For Parker Harris FR'85, dynamic and visionary leadership have been paramount to his success as co-founder of Salesforce, a global cloud computing company where Harris oversees all engineering and architecture as Chief Technical Officer.

Harris developed a love of math, science and computer programming at an early age, programming on an Apple II computer as early as eighth grade. He went on to pursue a fluency in French through his education at SYA and earned a degree in English literature from Middlebury College.

After college, Harris leveraged his French skills and love of computers to being a career at Honeybee Software in Montreal writing accounting software for local Quebec French companies (and handling technical support in French!). In 1992, he married his wife, Holly Johnson, in Montreal and the two moved to San Francisco to explore the West Coast.

Today Salesforce is recognized as the fourth-largest enterprise software company in the world, with annual revenue of $10-billion and a market value of over $75-billion. Headquartered in San Francisco and with offices around the world, Salesforce has a global reach with its services translated into 31 languages. Salesforce has been named the most innovative company in America by Forbes magazine more than once, most recently in 2017, and it is also ranked among the top 20 of Fortune magazine's 100 Best Companies to Work For.

Salesforce also has a philanthropic arm, Salesforce.org, which was created at the founding of the company as part of its 1-1-1 model: 1% of Salesforce equity was placed into the foundation at inception, 1% of employee time is given every year and 1% of Salesforce profit is given away each year. That translates today to 2.3-million volunteer hours, $168-million in grants and over 32,000 non-profits using the Salesforce platform. This fall, Salesforce announced that it would donate $12.2-million to San Francisco and Oakland Unified School Districts to expand computer science education and access to a quality education in the communities where Salesforce employees live and work. Additionally, Salesforce employees across the U.S. have committed to spending 40,000 hours volunteering in education, doubling its previous school year commitment.

"There's nothing more important to the future of our community than making sure we give our youth the best education possible," quoted Harris in a recent blog post.

Harris serves on the boards of several nonprofit and educational boards including Lick-Wilmerding High School (CA) and Middlebury College.

In a blog post, Harris wrote, "Leadership truly sets the tone." His commitment to the elements of SYA's mission ― mastering a second language, displaying aptitude in academic challenges, cultivating cultural awareness, and becoming a global citizen ― set an extraordinary example for those who follow in his footsteps.

SYA alumni make a profound impact in their careers and communities. Within our alumni community, certain individuals made extraordinary impact through professional and/or volunteer endeavors and in their contribution and leadership within the SYA community. The SYA Distinguished Alumni Award was established in 2015 to recognize these outstanding alumni leaders.

This year, SYA is proud to announce the 2017 recipients of this prestigious recognition: The Honorable Charles H. Rivkin FR'79 and Parker Harris FR'85. Their commitment to the elements of SYA's mission ― the adventure of understanding different languages, cultures and peoples — established an extraordinary foundation for their personal growth and development.

These alumni illustrate that SYA serves as a launching point for life. Since their year with SYA, each has distinguished themselves in a multitude of ways. They have found successful careers in international relations and technology. They have made a significant impact in their respective fields and through service, and continue to connect themselves and those around them to the global community. Read more about the Distinguished Alumni Award, and nominate your choice for 2018 by clicking here.

Take a visual tour of fieldwork taking place on our four campuses around the world, from cheese making to art explorations.

We believe that the learning environment extends well beyond the classroom walls, and therefore Practicum is designed to continually present students with opportunities to challenge themselves.

Travel around the world with the Class of 2020 in this photo essay featuring highlights from the first weeks abroad.

Behind the Scenes: The Long Run

SYAers around the world followed Séverine's progress as she ran through famous sections of the race, feeling the adrenaline of each mile marker.

President Tom Hassan reflects on the observance of the 75th Anniversary of the D-Day Landings, a visit to Paris and the Notre-Dame Cathedral, and a gathering of over 30 teachers and educational leaders in Viterbo, Italy.