Skip To Main Content
Being Chinese American in China

Isabelle C. is currently a junior at SYA China and a blogger for the Campus Reporter program. She comes to SYA from Iolani School in Hawaii.

When you arrive in Beijing, there’s one thing that Mr. McLoughlin (the Resident Director) tells you to do: blend in. For many SYA students, this is almost unattainable when it comes to outward appearance, but for Asian American students, it’s already there. 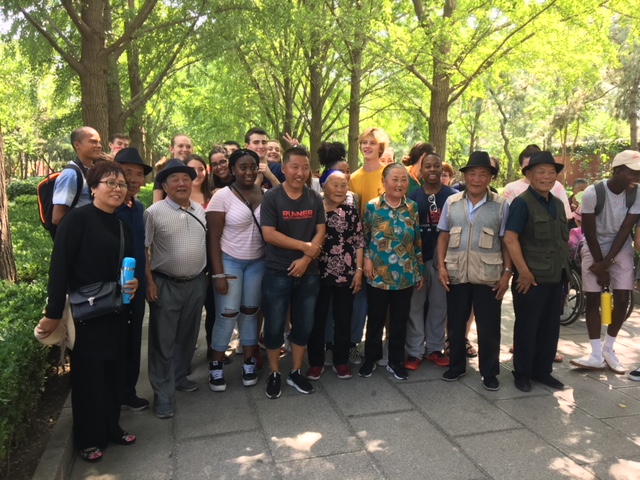 This first month in Beijing has been one of the most interesting months of my life. I have learned and come to accept so much about my identity as a Chinese American by experiencing life here. Prior to choosing to attend SYA China, I had been uncomfortably stuck between feeling too Chinese to be American and feeling too American to be Chinese. I knew that coming to China would help me to accept who I am and help me to find my identity, but I also had worries that I would be judged by native Chinese people for not being able to speak fluent Mandarin despite being ethnically Chinese.

Although I was born and raised in Honolulu, Hawaii, my parents are both from Hong Kong, and my father spent most of his childhood in California. Cantonese was my first language, but as I started to go to school and make friends, it became more advantageous for me to speak English. It is one of my greatest insecurities- I feel isolated from my family because of my inability to speak their native language fluently. Think of me as a banana- yellow on the outside, white on the inside. In Chinese, it’s 黄皮白心。On the outside, I look Chinese, but on the inside, I am very much a foreigner.

However, I have been met with acceptance by everyone who I have spoken to in Beijing. Sometimes I get a few weird looks when I ask for someone to repeat something, but people who I introduce myself to are extremely warm and accommodating. In fact, looking like I am from China has actually been very helpful.  I don’t get stopped when I am out exploring Beijing for pictures, I don’t get stares in the street or treated as if I am an outsider when interacting with people who don’t know who I am. However, having a Chinese face comes with some responsibility. When ordering food with friends, servers will turn to me for verification, even though my friend’s Chinese is way better than mine. People will look at me for an explanation and translation when they wish to speak to my friends, and when people want photos with SYA students, they will usually hand the camera to me.

The point of my blog is this: if you’re Asian American and you’re scared to come to China because you fear that you’ll be judged, don’t be. You might actually enjoy some unintended benefits from who you are and how you look. Beijing to me is an amazing city with people who are extremely accepting of who I am. I have learned to love myself and the mix of my Chinese and American identity. I realize now that I had no reason for my prior anxieties.

And if you’re not Asian American, I don’t want to deter you. Blending in with everyone else is fun, but so is standing out appearance wise and owning yourself and who you are. It’s very easy for my friends to talk to people, because so many people want to get to know a real 外国人（foreigner). So many people in Beijing are going to love to get to know you.

This first month in Beijing has been a great lesson in self-acceptance and has helped me to set goals of who I want to be. I am so excited to see what these next 8 months bring me!